Spring in the Woodland

These pictures show the bluebells this year, and the newly cleared area that was just brambles last year….  and the downside of the recent bad weather.

The work parties have cleared most of the brambles from that side and bramble clearance will continue next winter on other areas.   The newly cleared path shows where all the mud has been scraped off and will go well alongside David’s river path!    The plan is that once is all dries out (hopefully if we ever get a summer this year) we will lay a better surface down.

News from the Woodland

You may recall in the last Review I told you about the special working parties to dig up and remove the old concrete posts at the southern end of the woodland, which once formed the uprights to a long disappeared chainlink fence.

I am pleased to report  that this work has now been completed.

The NLRA also wants to especially thank Cllr Derek Mortimer who organised their removal through the MBC Environmental Services team.  A team of four MBC staff met our November working party team on site and the posts were transferred to their vehicle.

This saved us many hard ours breaking them up and transporting them to the recycling centre at Tovil.  We are very grateful for this assistance, which has led to a permanent improvement to the woods.  I am pleased to advise that the posts were to be taken to a contractor who would remove the steel reinforcement and then crush them for re-use as hardcore.  The steel was also to be recycled.

I am also pleased to announce that after much lobbying by our Chair, just before Christmas the NLRA was the recipient of a donation of £500 from Millwood Homes from their Community Fund, to help towards providing for a firm surface on the path through the woodland, which is a project the team has long wanted to undertake.

Those of you who have been through the woods lately will know just how muddy and rutted this can get in wet weather.  Planning for the project will start in January for completion later in the year.  I will keep you updated on progress in future editions of the Review.

The NLRA wishes to express our thanks for this kind donation by Millwood Homes.

With Spring not too far round the corner now that the year has turned, to help with your anticipation of its arrival and enjoyment of the woodland, I thought I would share a brief diary of my observations of some of the stages of our woodland emerging from its winter hibernation in 2017.

Easter Monday – Woodland a haze of Bluebells and birds singing loudly, including warblers. Cow Parsley and Star of Bethlehem out in flower in the lane and foliage on the mature oaks emerging.

Mangravet Wood was presented to the NLRA by developer Taylor Wimpey in July 2014.

Mangravet Wood in Pheasant Lane was acquired by Taylor Wimpey when it purchased the former fire station land for its housing development in The Farrows and Hawkes Way.

For legal and insurance reasons, the wood is held in the name of North Loose Limited, which works alongside the NLRA and is responsible for the management and maintenance of the woodland.

The woodland is protected by a Tree Preservation Order and is now further protected as a Designated Ancient Woodland. However, the best protection of all is for ownership by the community – which has now happened.   We are very grateful to Taylor Wimpey for this woodland, which will be preserved for the benefit of the local community.   The woodland will remain in a similar format as at present and will be sensitively managed to encourage wildlife, flora and fauna.   This woodland will continue to be open to the public and we will encourage educational visits.

Originally, there was a great deal of rubbish to be cleared.   Work parties were undertaken by members of North Loose Ltd and other members of the community. Anyone who wishes to be involved in this project should get in touch – email David Southgate on david@northloose.co.uk.   We are now working to our management plan, which includes removal of non-native species, brambles, spot coppicing sweet chestnut  and safety work on protected trees, which has slowly brought this woodland back to its former glory.

This woodland’s health has been demonstrated by the magnificent Bluebell displays each spring.

Our thanks to Kent Highways, who provided lorry loads of earth and constructed a mound at the entrance to the wood, to help prevent vehicle access
The photos opposite show the construction of the mound and the newly installed information board.

Progress to date:
We have
· sought professional guidance from an arboreculturist;
· obtained a full written survey on the condition of trees with regard to disease, safety etc;
· obtained permission from Maidstone Borough Council Tree Officer regarding required work;
· completed all tree  safety work by March 2017.

Work still to do includes removal of the old redundant concrete fence posts and creation of an all weather surface for the footpath through the woods.;

Thanks also go to: 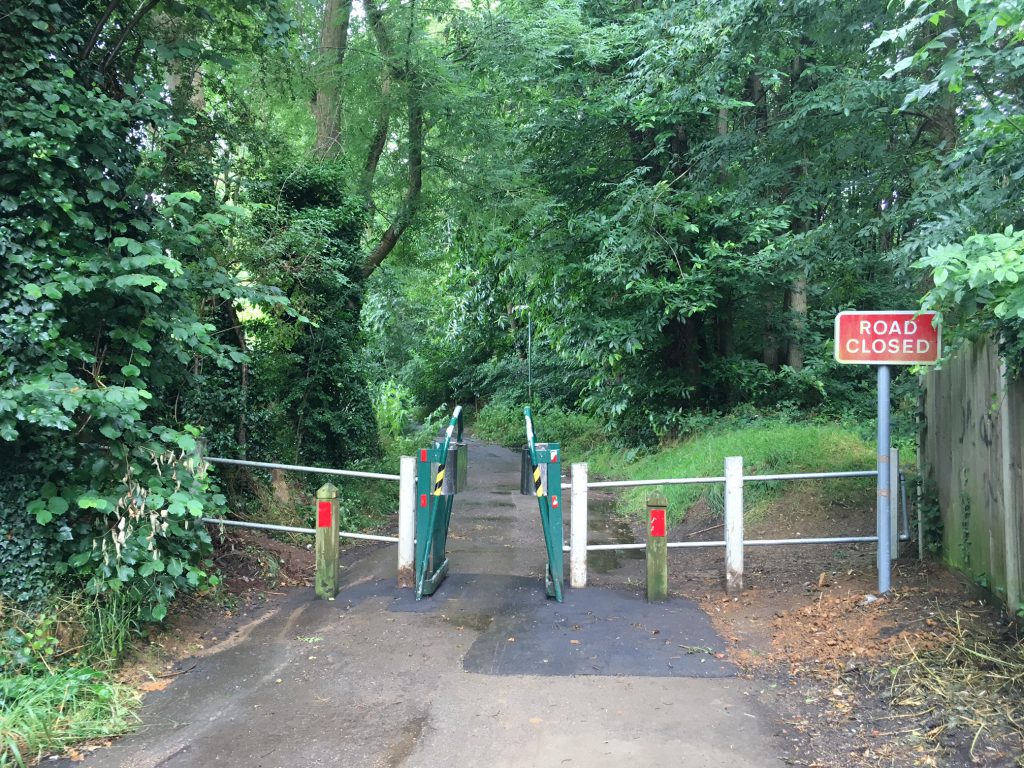 Councillor Brian Clark for his assistance with the erection of a second barrier further north in Pheasant Lane. This prevents cars, vans etc from attempting to use Pheasant Lane as a cut through then trying to turn round in the wood – causing damage.
– Maidstone Borough Council for taking away some of the worst excesses of fly tipping over the years 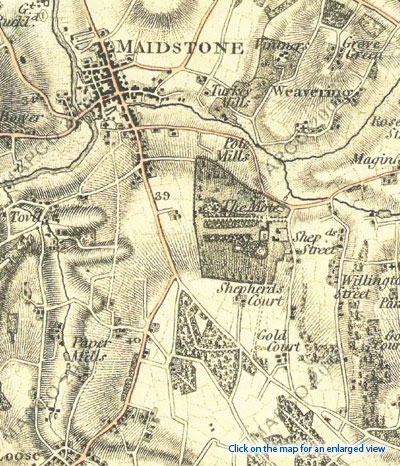 Photographs below show some of our volunteers litter picking and felling dead chestnut stools. 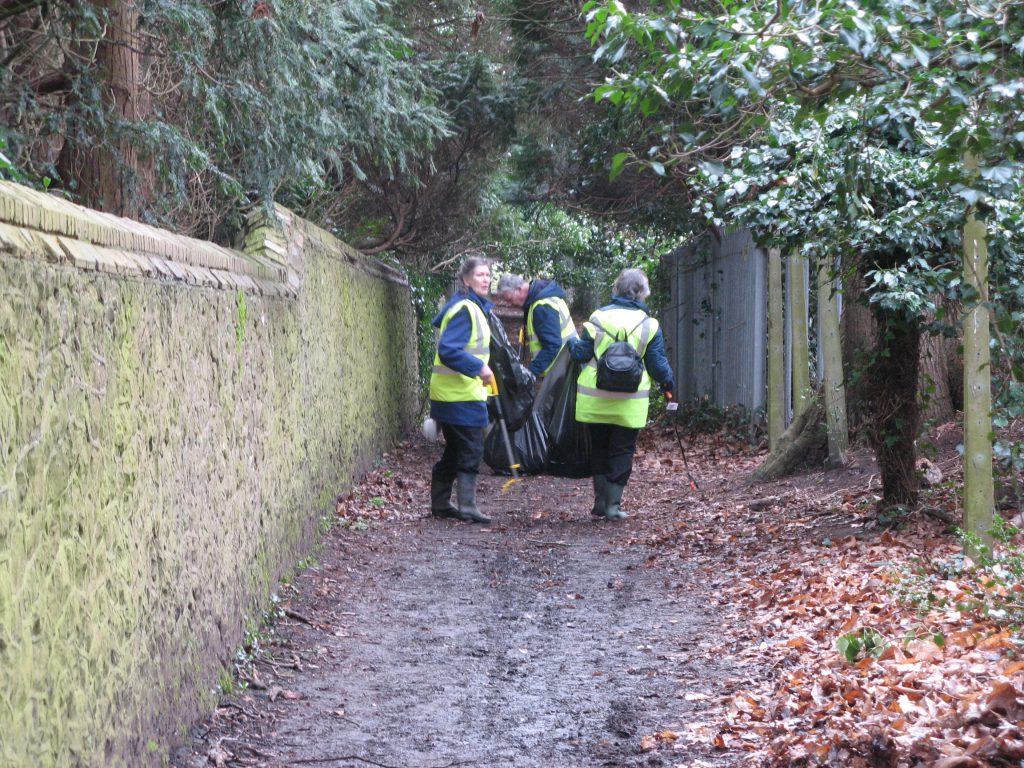 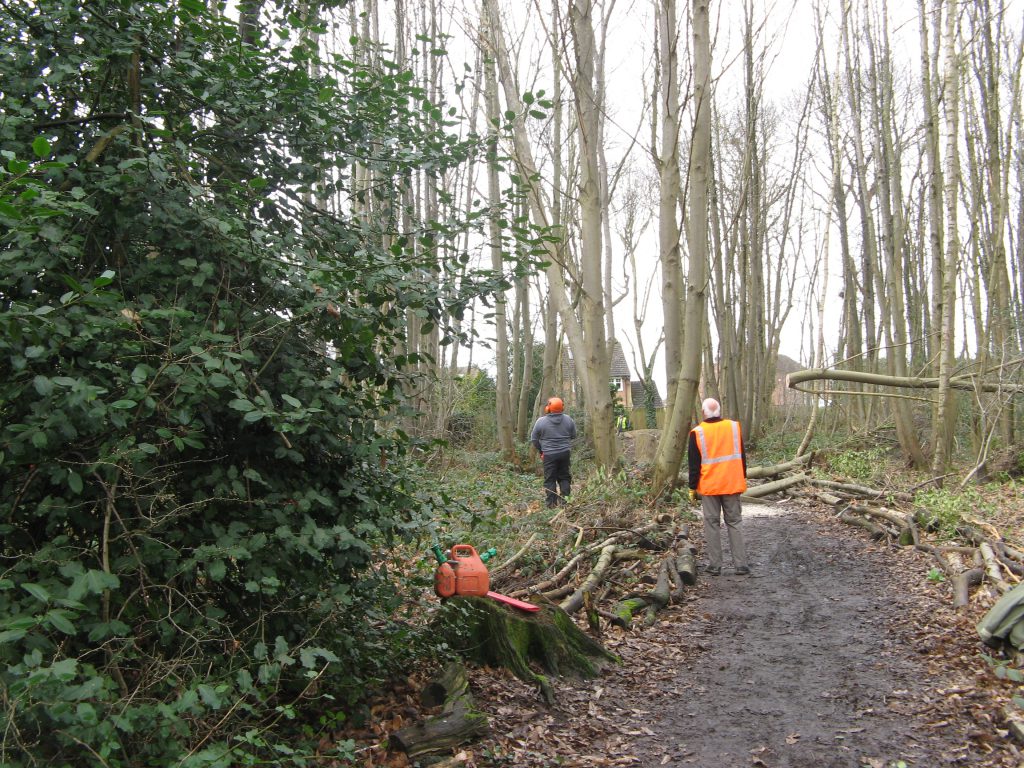