It was a full house for the North Loose Ends Christmas Party on Wednesday with Christmas Carols and music provided by Mick Abbott and a free raffle prize for everyone attending.

We all left feeling full of Christmas spirit (not the alcoholic kind).

As usual there was too much food but all of the surplus was donated to feed others elsewhere and nothing was wasted. 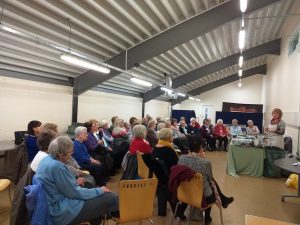 A good attendance of members at the November meeting of Loose Ends were entertained by Pam Hayward, who demonstrated various techniques for making Yuletide wreaths. 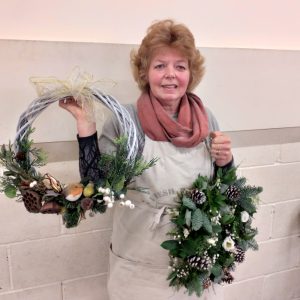 Following the demonstration the four wreaths which she made were raffled off to members together with some house plants donated by a member. In appreciation of Pam’s demonstration a donation was made to her nominated charity, the Alzheimers Society at Dairy Court. 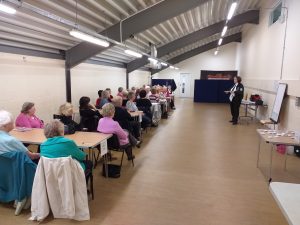 Thirty Eight members attended the North Loose Ends for the November meeting on Wednesday to hear an interesting talk from the Community
Support Officer on the scope and nature of her work. 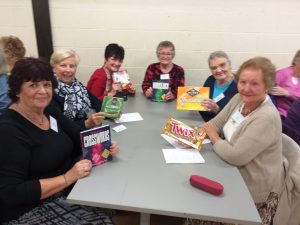 This was followed by a fiercely contested quiz, which rounded off the afternoon. 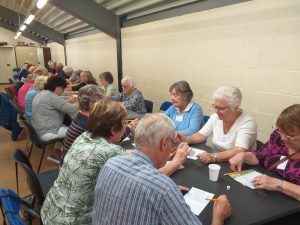 The September Loose ‘Ends’ meeting welcomed 33 members and a visitor who began the afternoon with a Beetle Drive. After 6 rounds of frantic activity, rattling dice and laughter, Val Fuller was the winner of the first game with the highest score. 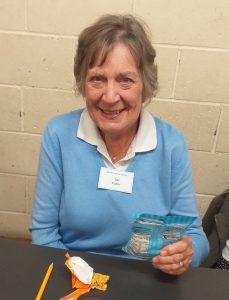 This was followed by Sherry Giles who went on to win the second game. After a much needed refreshment break, the afternoon concluded with a thought provoking exercise based on ‘well known sayings’. 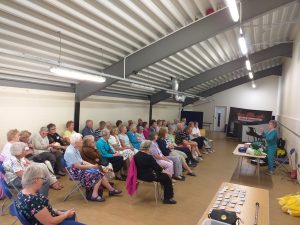 The August meeting of Loose Ends started with an interesting talk by Christine Frost, a member of Loose Ends, on her experiences as a Court Dressmaker.

We then had a short Quiz whilst Phillip Patton set up his keyboard. 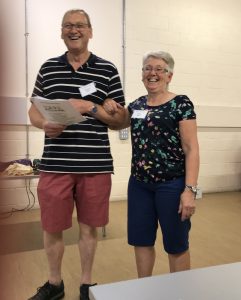 The afternoon concluded with an enjoyable singalong session with musical accompaniment from Phillip. 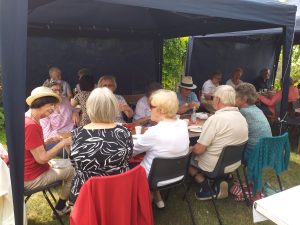 We were fortunate to once again have fine weather for the North Loose Ends barbecue, which took place on Wednesday,17th July. This year there were in excess of 60 diners, which is a 50% increase on last year. Mick Abbott provided us with excellent music as usual and Morrison’s Supermarket kindly donated strawberries for the dessert. 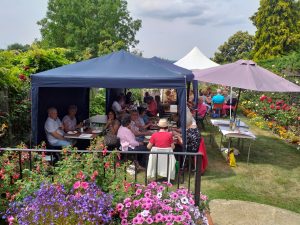 Thanks go to a local charity who kindly loaned us two of the gazebos, the chairs and tables and we shall make a donation to them as token of our thanks.

We are fortunate to have an enthusiastic committee and members who helped prepare for and run the barbecue and I am grateful to them, my wife and other relatives who all pitched in to help make the day the success that
it was.

There was some food surplus to requirements, which was donated to Maidstone Food bank. 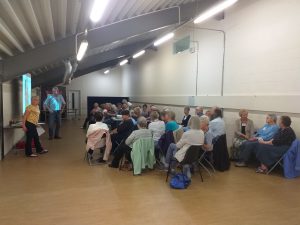 A bumper number of Loose ‘Ends’ members (45) welcomed Alan Hayward and his wife Pam to our June Meeting. Alan gave a very interesting illustrated talk about ‘Brogdale Farm’ near Faversham. As well as a brief outline on its history and purpose, Alan then spoke at length about the role it plays as the Home of The National Fruit Collection. 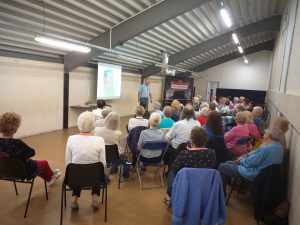 Everyone became enthralled with the the variety of fruits that were described together with Alan’s personal experience at Brogdale as a Tour Guide.

Our thanks go to Alan for a very enjoyable and informative afternoon. 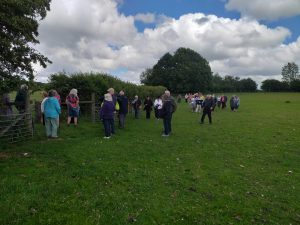 40 Loose ‘Ends’ members met at Horlands Farm in Marden on Friday afternoon at the invitation of Dick and Liz Russell who kindly gave us a very informative and enjoyable tour around their working and largely organic farm. 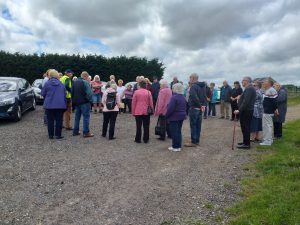 This was the first visit arranged by Loose ‘Ends’ away from the ‘Y’ Centre and as an additional activity it proved to be very successful. 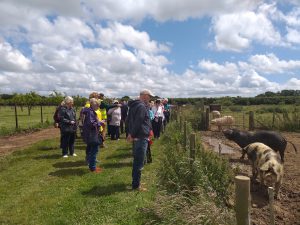 As well as meeting the animals we were able to enjoy the open countryside and taste the fresh pear and apple juice produced at the farm. The afternoon concluded with refreshments at Millbrook Garden Centre, where everyone enjoyed a Cream Tea with home made scones. 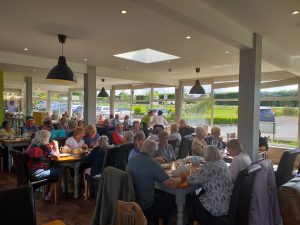 Our thanks go to Dick and Liz for their kind welcome and hospitality and to Lesley and the team at Millbrook who all helped to make the afternoon such a success. 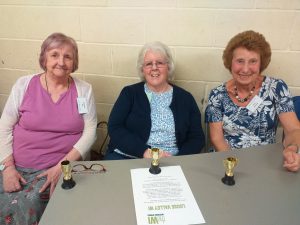 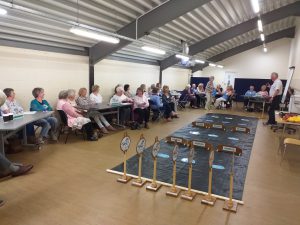 The May meeting of Loose ‘Ends’ attracted 38 ‘Race Goers’ who competed as 6 teams in the Loose’Ends’Grand National.  After 6 heats, and supported by the smallest race team of 3 members, ‘Richmond Rose ‘romped home ahead of ‘Mayfair Maiden’ to claim victory and the Gold Cup. Our thanks go to Sean Carter who stepped in at short notice to deputise for Richard Hunt as Race Commentator.

April – The Trials and Tribulations of Public Speaking

The April meeting of the North Loose Ends was attended by record numbers who came to hear the very popular Barbara Stevens talk on the subject of, The Trials and Tribulations of Public Speaking. She did not disappoint her audience who were kept laughing throughout her speech, which lasted in excess one an hour.

If, as they say, laughter is the best medicine, then we all left the meeting in better health. We will most certainly book her again. 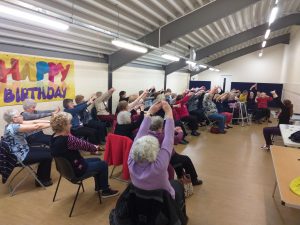 No, this is not a holdup at the Y Centre, its the North Loose Ends members taking part in a yoga lesson given By Shannon Clarke. The gentle yoga exercises were designed to help members keep in shape whatever their age.

Judging by the numbers of members attending and the enthusiastic applause given to Shannon afterwards it was a great success. Members rounded off the afternoon by exercising their brains with some word puzzles.I don’t know if it was down to the physical exercises sharpening their thinking but the members completed the puzzles with enthusiasm and great success. 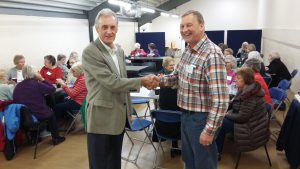 The February meeting was a talk given by former Detective Chief Inspector Colin Breed on Royal visits to Kent, was both interesting and well received by the very well attended February meeting of the North Loose Ends,  which met on Wednesday, 20th at the Y Centre. 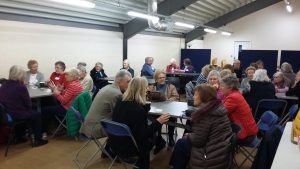 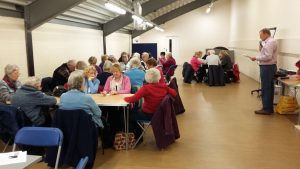 Thirty two members of North Loose “Ends” braved the elements to take part in the January Quiz.It was a nip and tuck competition over seven rounds with plenty of laughter among the rivalry. 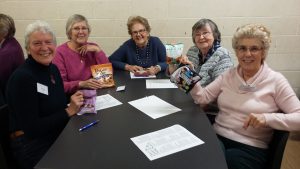 The winning team outscored the runners up by just half a point.