WHEATSHEAF PUBLIC HOUSE TO BE DEMOLISHED

A planning application has been submitted to demolish The Wheatsheaf.

This was expected as part of the highway improvement work to the A229 and A274 at the junction.

Demolition will also facilitate a new footway, cycle parking and additional soft and hard landscaping.   There will be a sculpture including a ‘Sheaf of Wheat’ to commemorate the previous use.

The NLRA will not be submitting any objections to this expected application and it is anticipated that it will be approved by Maidstone Borough Council. 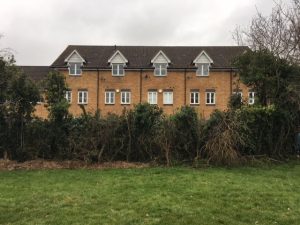 The hedgerow adjacent to Footpath KB21 at Richmond Way green has been cut back and damaged.   This hedgerow grows on land leased by the NLRA from MBC and the unauthorised cutting back of this hedge is potential criminal damage and contrary to the Hedgerow Regulations.

We have reported this matter to the police and formally informed and discussed this incident with Maidstone Borough Council, who are investigating further.

Letters have been distributed through the doors of houses in Lacock Avenue that back onto the footpath by the damaged hedge, and also to the bungalows in Richmond Way near the green for their information.

An interesting read from the early 1900s

EFFLUENT PROBLEMS ON THE GREENWAY – UPDATE

Councillor Brian Clark has been chasing this problem and finally Southern Water acknowledged they were responsible for dealing with this issue.

Following a detailed investigation, they discovered that both pumps at the nearby pumping station were failing.

(A pumping station has two pumps to allow operation to continue in the event of a single pump failure.)

As a result, two replacement pumps were installed last week (16 November) and are now in operation.

The test will come for a proper appraisal when we next have heavy rain.

Above photos show aspects of bramble clearing at Mangravet Woods carried out by volunteers from NLRA on 2nd October.

The clearing of the brambles is to showcase the bluebells and wood anemone in the spring.  Without this clearing work the flowers would be hidden from sight.

Work completed for members and non-members of the North Loose area and beyond. 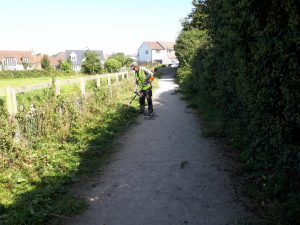 Attached are some phographs of our volunteers hard at work on the Loose Greenway on Thursday 16th September.  On a lovely sunny morning they started cutting down the summer’s wildflowers now they are dying back. They are left in-situ to allow them to drop their seeds ready for next year’s display. We will clear away the dead vegetation on our next visit in October. 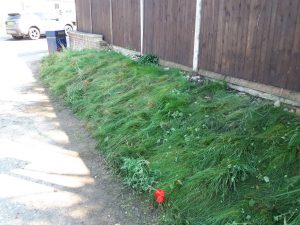 We also cut back overgrowing vegetation from the hedgerows, mowed the grass and weeded the Cripple Street bank, in preparation for a light strim.’

NEW BENCHES FOR THE GREENWAY

Work is currently being carried out on the Greenway at the bottom of Westwood Rd to install two benches. The trenches have been dug and Richard and Barry have laid the concrete for the bases. The benches are due to be fitted in the near future. This will provide a lovely spot for residents to stop and enjoy the landscape over the valley.

Many thanks to everyone involved in the project.

Update July 2021 –The final preparations have been completed , the new benches will be installed shortly.

Many thanks to Tony,Bob,Richard, Cathy and Alan Plus support from Philip and Brian for giving up an hour this morning.

Littercam is a new scheme for catching people throwing litter from moving vehicles. MBC are the first council in the UK to trial this for a year starting next month. As chair of MBC environment Derek Mortimer was interviewed by the Sunday Times and i understand this was followed up in the Daily Mirror yesterday. BBC were interested and approached Derek to film a local area picking litter. Derek suggested the NLRA and so this morning we became the first community group in the UK to be involved in this new idea. This was shown on Breakfast Television.

Littercam is a mobile set of cameras fixed to lamp posts which picks up peoples arms or other objects coming out of vehicles windows and films this and the registration number of the vehicle. This information is sent to MBC who get the owner of the vehicles details from the DVLA and send a fine of £ 120 or £90 if paid within 28 days. Even allowing for the cost of cameras and moving them on a regular basis MBC hope to save money as the cost of sending teams out to collect rubbish is enormous.